In this three minute Rock n' Roll romp, Chambers challenges each of us to decide how we define innocence.

Rich Chambers is one of Canada's best-kept secrets, and could easily become a household name in a matter of months!

VANCOUVER, BC, September 16, 2021 /24-7PressRelease/ -- For his fourth single of 2021, Canadian rocker Rich Chambers has released an energetic, driving guitar-based tune that respects the vintage Rock n' Roll sound that constitutes his roots while simultaneously offering a freshly unique modern Rock n' Roll sound that is distinctly his own. Loaded with both the optimism of innocence and the wisdom of experience, "High School Can't Last Forever" reaches across multiple demographics to ignite the Rock n' Roll flame in all of us.

"I wrote this song looking to incorporate the sounds and vibes of both Green Day and Buddy Holly," says Chambers. "Since the song is about innocence, both lost and gained, and how past reflections often determine our paths forward, I consciously chose to merge the sounds of two different rock vibes—one from the past and one from the present to mirror the lyrical theme. Essentially, this is a three-minute, fast paced, rock soundtrack for all of us to consider how we each define innocence."

Taking his inspiration from classic guitar, pop, and country rock from the '50s right through to the '90s, Chambers puts a modern spin on his music to create songs that are comfortingly familiar, yet also freshly new. Born and raised in Vancouver, Chambers has been playing guitar, singing, and writing songs since his early teens. With a bachelor's degree in English and a master's degree in Humanities, Chambers is not your average recording artist. There is a cerebral element to a lot of his music as he often dives into the essence of the human condition—but not always. Chambers himself will admit that sometimes music is just about having fun. With his latest single, Chambers has achieved both his goals as he balances the cerebral with the fun. "High School Can't Last Forever" injects a moment of contemplation and reflection within the listener while simultaneously causing them to tap their feet and sing along!

With four solid singles released in 2021 and many more on the way, Rich Chambers is one of Canada's best-kept secrets, and could easily become a household name in a matter of months! 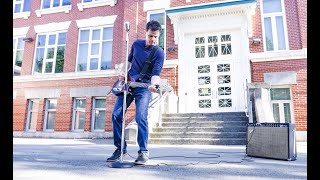