Level 99 Games' latest release translates the excitement of modern video games back to their tabletop roots.

We're very proud to be building upon the success of Bullet Heart, and bringing a new dimension of video-game-board-games to players all around the world. -D. Brad Talton Jr, Level 99 Games President

ALBUQUERQUE, NM, October 05, 2021 /24-7PressRelease/ -- Level 99 Games, a tabletop game publishing company, today announced the upcoming release of Bullet Star (stylized as Bullet★) and has made the game available for pre-purchase on their online store.

Against the background of a growing renaissance of tabletop games, Level 99 Games aims to translate the excitement of modern video games back to its tabletop roots, and Bullet Star is their latest project in this endeavor.

Bullet Star is a board game inspired by the popular Shoot-em-up (SHMUP) and Match-3 subgenres of video games. In the game, players simultaneously arrange incoming bullet discs to form patterns and send more bullets to their opponents while trying to avoid being overwhelmed. Players may play against one another, or join forces to take on one of eight bosses in cooperative mode.

Following up on the success of Bullet Heart (stylized as Bullet♥︎), which was delivered and sold out earlier this year, Bullet Star introduces 8 new playable characters and bosses. It can be played alone or combined with Bullet Heart. The new game will also be accompanied by a reprint of Bullet Heart, as well as a standalone deluxe upgrade which can be used to add premium components to either Bullet Star or Bullet Heart.

Players who pre-order the game in the Level 99 Store will receive a download of the game's high-energy soundtrack—which can also be used as a timer for play—as well as reduced-cost international shipping in most places around the world.

D. Brad Talton Jr, the president of Level 99 Games said "We're very proud to be building upon the success of Bullet Heart, and bringing a new dimension of video-game-board-games to players all around the world. We hope that Bullet Star brings fun and excitement to your table."

Bullet Star is available for pre-order in the Level 99 Store (https://www.level99games.com/bullet), priced at $39.99. The retail release of Bullet Star is scheduled for May 2022, marking the first anniversary of Bullet Heart's release.

About Level 99 Games
Level 99 Games is an independent studio-publisher creating original board games for a video-game generation.The Level 99 Games team is made up of passionate developers who grew up loving both tabletop and digital games. Founded in 2012, the team has delivered over 15 major releases, including projects featuring popular video game licenses such as Mega Man, Dead Cells, Street Fighter, BlazBlue, and Shovel Knight.

About Bullet★
From Level 99 Games, creators of BattleCON, Millennium Blades, and more, comes a new chapter in the SHMUP-inspired puzzle-action board game, Bullet! In Bullet Star, you and up to three friends will battle it out in real-time using unique superpowers to fend off endless waves of bullets. Duel to the last one standing, or join forces to topple incredible bosses in this addictive, 15-minute game.

- Fast-paced puzzle gameplay featuring familiar pattern-matching mechanics.
- Eight diverse characters from around the world and from space!
- Each character brings a unique angle to gameplay—it's almost like 8 games in one!
- Join forces against eight powerful bosses that will test your strategy and teamwork.
- Play in frantic real-time with the original game soundtrack in the background or take it slow—your choice. 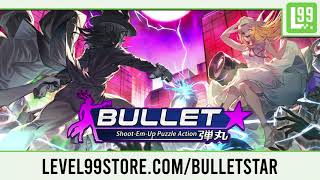