Private investor is working with Millionaire Mentorship contest winner to renovate home in the Meyerland community. Local contractors and suppliers will provide labor and material.

I am so grateful to be the first winner of the Millionaire Mentorship contest. To be able to learn from an expert like Troy Kearns is a dream come true. Plus...I'll be left with a sizable amount.

HOUSTON, TX, October 06, 2021 /24-7PressRelease/ -- An entity associated with private investor Troy Kearns has acquired a four-bedroom house in the desirable Meyerland community of southwest Houston. The 2,446 square foot single-family home, which was built in 1965, will be renovated for resale. Kearns plans to utilize local contractors and suppliers to complete the flip project, now scheduled to begin immediately. Houston resident Joel Palacios was winner of the first national Millionaire Mentorship™ contest drawing last July, and has been working with Kearns since then to locate a property suitable for flipping. Sponsored by the Troy Kearns Channel on YouTube, the Millionaire Mentorship contest offers a path for a new would-be real estate investor to learn about the business directly from one of the country's most successful private real estate investors. In addition to obtaining an excellent on-the-ground education directly from his mentor Kearns, Palacios will receive half the profit from the resale. Palacios said, "I am so grateful to be the first winner of the Millionaire Mentorship contest. To be able to learn from an expert like Troy Kearns is a dream come true. Plus, after everything is said and done, I'll be left with a sizable amount to kick-start my next flip." Progress on the Houston Millionaire Mentorship home renovation project may be followed on the Troy Kearns Channel on YouTube and the channel's social media.

ABOUT THE TROY KEARNS CHANNEL
Troy Kearns has been in the real estate industry since 2000. He began his career as a Real Estate Agent but had a hunger for more action (selling more than 2000 properties during one year was not enough for Troy). He started investing in real estate in 2002, expanded his reach into key areas, and now maintains substantial real estate holdings all over the United States, including Washington, Nevada, Pennsylvania, Kansas, Missouri, Louisiana, Mississippi and Florida. Currently, his main real estate investment focus is the Kansas City, Missouri vicinity, where his family now resides full time. Companies affiliated with Kearns have invested more than $7 million in the Kansas City area since January 2020, primarily in single-family homes. In fewer than 20 years, Troy Kearns has flipped hundreds of homes and commercial properties, and acquired long-term wealth after starting with nothing but a burning desire to succeed. Now, he is teaching others to learn the secrets of his success with an energizing presence on his YouTube channel, TikTok, Instagram, Facebook, Twitter and website. Remember: Like, Share, Follow and Subscribe! 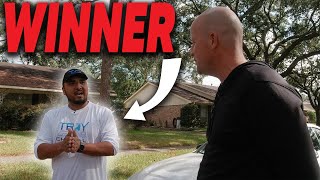