Fresh From Insomniac's 'Beyond Wonderland' Rocking Thousands- The Don of Positivity, Rob GEE Now Gears Up for EDC Las Vegas

"We all have those moments, where you just want to give up. Feeling tired and weak; your eyes wide shut. That's when you search and find that inner strength in you. Lift yourself up; that's what you gotta do." -Rob GEE (Lyrics from Never Give Up)

MIAMI, FL, October 07, 2021 /24-7PressRelease/ -- The O.GEE. of hardcore, Rob GEE is not playing; after an unrevealed epidemic swept our world, last year and put a stop to all of our lives and the live entertainment industry, as a whole. With this uncertain future that we all have come to face; we have had to learn to adapt, survive and now we must thrive. Turning struggles into strengths is something that this Positivian has not only spoke of throughout his years in the scene, with his #PositivianVibes Mantra, he also walks the walk. Despite the blows, this past year has dealt out to this hardcore veteran, he's coming out of it, swinging!

Fresh from Insomniac's 'Beyond Wonderland', rocking thousands of Hard Dance fans, Rob GEE is now gearing up for Insomniacs 'Electric Daisy Carnival', in Las Vegas; rumored to be the hottest EDM event of the year. He's ready to wow the EDC Festival goers this year; with his forthcoming releases and the beguiling energy he puts out into the ethers. One of his favorite things to do is speaking to the fans and seeing all their glowing faces again. It's what gives him purpose. If you get a chance to catch him on a lineup; Rob GEE's charismatic stage presence is a MUST SEE! Rob GEE will be on the Wasteland Stage at EDC, Las Vegas this year; happening October 22nd-24th, at Las Vegas Motor Speedway, as a favorite- continuing his long-running relationship with BASSCON-Insomniac events.

He really enjoys the chances he gets to rock the crowds at these Insomniac events. As a matter of fact, Rob GEE has been playing EDC and 'Nocturnal Wonderland', for almost 30 years! His unique style and unconventional approach have made him a favorite, across many age groups and musical genres. He's still pumping out his notorious hardcore anthems; that are catching the ears of the younger raving crowd. His ability to seamlessly blend his hip-hop roots, metal, and hardcore sound, alongside his motivational and animated lyrics; have made him a staple in every raving generation.

That's not it! The GEE man just flew back from Amsterdam shooting his latest music video, for "1 gabber family". Showcasing his infamous talent for crossing genres and creating a sound that is all his own! he believes that despite subgenres we are still one family and he's about to send that message to all; when he plays Beyond Wonderland, Electric Zoo, EDC, and Freaky Deaky. He will be showing that gabber is alive and well in America; as well as the rest of the world! he's not playing coming out of covid. He's making up for that time lost, with upcoming releases and live shows in the EDM world!

Aside from being a hardcore icon and a positive influence to so many in the EDM community, the GEE man has some special forthcoming releases in store. He's currently working on another hit, with his guy Mr.Bassmeister on a track titled, 'Bong Bong'. Where he does his best impression of his very dear friend RZA, from Wu-Tang Clan. But that's not all. He's working on his next anthems, 'Never Give Up', with the German native Producer, D-Ceptor and 'Sacrifice' with System Overload and Insane S. The last time the trio Rob GEE, System Overload, and Insane S got in the studio, they pumped out the party belter we all love, 'Old & New School'. These tracks full of raw and powerful lyrics, highlight the battles that we all face in life.

Keeping true to Rob GEE's #PositivianVibes Mantra, the lyrics to 'Never Give Up', speak to us all. "We all have those moments, where you just want to give up. Feeling tired and weak; your eyes wide shut. That's when you search and find that inner strength in you. Lift yourself up; that's what you gotta do." - Never Give Up.

Be on the lookout for Rob GEE tearing up the turntables and microphone with his unique live stage presence melding his own special brand of Frenchcore, Uptempo, and Gabber, coming to a city near you. One can not just hear Rob GEE, one must see and feel Rob GEE. A true entertainer unlike no other; and once you have your first taste of Vitamin GEE you will want some more and more.

"There are no boundaries in music."
#GEEspect #PostivianVibes
~Rob GEE

Visit http://therealrobgee.com/ to find out more about Rob GEE's music, and make sure to check him out on Spotify, follow on Instagram, and subscribe to his channel on YouTube. For interviews, reviews, and collaborations, feel free to reach out through email.

Born and raised in New Jersey, Rob GEE has been a key player in the international hard dance scene since the early 90s. Rob GEE's career began at the Limelight nightclub in New York, where he would sneak in records and hop on the decks at any opportunity to play.

Today Rob GEE is a household name in the hardcore scene, having performed all over the world in countries including the Netherlands, Australia, Japan, Italy, Spain, Scotland, Austria, Switzerland, Hungary, Belgium, Colombia, Chile, France, and too many more to name. Rob GEE has taken the stage at many major international festivals such as Sensation Black, Mysteryland, Thunderdome, Tomorrowland, Love Parade, Defqon 1, Dominator, Decibel, and Electric Daisy Carnival. Rob GEE is an icon for young musicians around the globe, and his belief in the power of raw, hardcore music, makes him transcend borders. 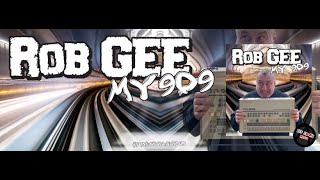