JOCHEN WERNE received the STATE MEDAL - the highest award of the Free State of Bavaria - for special commitment to environmental protection and announced an extraordinary new project with the EXPEDITION BLUE OCEAN.

If we succeed in awakening in a person a passion for the endless expanses of the deep blue oceans, that person will naturally become involved in protecting them, just as we do. Jochen Werne

MUNICH, GERMANY, October 29, 2021 /24-7PressRelease/ -- In the Imperial hall of the Residence in Munich on 26 October, Minister of State Thorsten Glauber presented the Environmental Medal 2021 to selected personalities, municipalities or organisations for their special commitment to environmental or consumer protection. The honor of this highest award of the Free State of Bavaria is bestowed on a maximum of 15 people each year.

Jochen Werne, who founded the Global Offshore Sailing Team (GOST) together with Guido Zoeller in 1999, was awarded the Bavarian State Medal. For more than 20 years he has been working to raise awareness in society for ocean issues. Over 30 GOST expeditions across the world's oceans culminated in 2018 with the Expedition Antarctic Blanc in an act of state in Antarctica supported by 19 heads of state and led to extraordinary attention to the concerns of our environment and the need for close friendly international understanding.

In his laudation, Minister of State Glauber underlined the inspiring enlightening character of the expeditions and the scope of their commitment to the protection of the oceans.

Werne emphasizes, "This extraordinarily honorable award may bear my name, but it is for me a GOST AWARD. Without the commitment and passionate dedication of all GOST members and supporters to each mission, all that has been created would not have been possible."

GOST is already planning the next major initiative, Expedition Blue Ocean (www.ExpeditionBlueOcean.org), which is open to anyone who wants to contribute to the oceans. Expedition Blue Ocean will take the sea route from Monaco in the Mediterranean to the Arctic port of Longyearbyen. Comparable to the Olympic torch relay, the expedition flag will be passed from one ship to the next. In the process, many crews will make a small but very important contribution to achieving a major goal. This will also serve symbolically to involve important actors in the field of marine protection and international maritime shipping in a dialogue.

Expedition Blue Ocean will serve as a platform for all crews and supporters in ports to promote the beauty of our oceans through events, fundraisers, international media coverage, etc. This will be done by raising civil society awareness of the importance and fragility of our planet's marine ecosystem in light of the United Nations Sustainable Development Goals. Viewers around the world will be able to follow the prestigious yachts, their crews and the events on the internet and social media, or get involved themselves as ambassadors of the expedition with their own contribution. The expedition management can be contacted at [email protected].

The Global Offshore Sailing Team (GOST), an international group of dedicated sailors comprised of members from all over the world. GOST which navigates on oceans worldwide and in which many teammates have naval backgrounds, have made it a priority to keep naval traditions alive and to use expeditions as instrument for the creation of international understanding, environmental awareness and peoples' diplomacy. 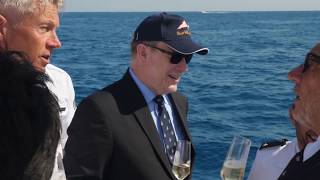 About GOST - 20 years of exploration