LOS ANGELES, CA, December 16, 2021 /24-7PressRelease/ -- When Marcus Newsome took on the superintendency of Petersburg City Public Schools in 2016, the move was equated to "Michael Jordan coming out of retirement" by one School Board member.

He'd just retired from neighboring Chesterfield Public Schools where he had successfully led the wealthy district for a decade. Petersburg was different: The city was millions of dollars in debt. Schools weren't accredited for decades. The district was near default on teacher paychecks.

"I thought the thing that was missing in the city was hope," Newsome said. "Hope and belief in students and what they could accomplish."

"This is a universal story – especially now – as people throughout the world experience crisis and grapple to maintain hope and find a practical way forward," explains Alan Blankstein, Award-winning author, educational leader, and Executive Producer of this film. He was encouraged to produce the film in a chance meeting with Sam Pollard, Emmy Award-Winning documentarian, who became a co-writer and Senior Executive Consultant.

"I was so moved by this work," said Heather Waters, RIFF founder. "I was literally brought to tears by this film. 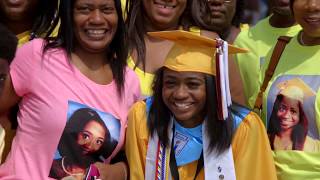 Petersburg Rising - watch what it's all about