[MADE IN KOREA] Plasmapp, acquired FDA Certification with their Mini Plasma Sterilization System... Spreading their Wings to Expand into Global Markets!

Plasmapp has attracted attention from these small and medium-sized medical facilities and hospitals that have high frequency of surgeries by introducing low-capacity and high-speed plasma sterilization technology with low thermal damage.

LOS ANGELES, CA, January 11, 2022 /24-7PressRelease/ -- Plasmapp Co., Ltd. (CEO Yoo-bong Lim) is a plasma company established in 2015 at KAIST's laboratory. With their original plasma technology, it has 140 patents and has been selected as a "Preliminary Unicorn" and has been included in the Top 100 Small Business Startups by the Ministry of SMEs and Startups. Along with attracting 46 billion won in investment, it has recently been recognized for its technological prowess by receiving an A grade in the evaluation of special cases for technology listing. It is currently exporting to more than 50 countries around the world, achieving 'top 3 million dollars in exports' in 2021. In November 2021, it was the first mini plasma sterilizer to be approved by the FDA.

Existing medical sterilizers had to be made in large-capacity because they took a long time to sterilize. This led to the manufacturing of expensive equipment, and there were limitations because they could not be used in small and medium-sized medical facilities (at the clinic level). Plasmapp has attracted attention from these small and medium-sized medical facilities and hospitals that have high frequency of surgeries by introducing low-capacity and high-speed plasma sterilization technology with low thermal damage.

In addition, by introducing plasma technology for regenerating and activating medical implants and by launching a product that improves osseointegration performance by sterilizing and removing impurities in one minute, Plasmapp is expected to secure their position in a market that requires high surface-treatment performance.

Direct Sterilization with Plasma (Medi-DSP) is a sterilization technology that can extend the life of medical devices by minimizing damage using low temperature sterilization methods with plasma. Existing sterilizers have limitations in terms of damage to medical devices due to high temperatures and high pressure.
Bio-RAP (Regenerative Activation by Plasma) is a biological regeneration and activation technology that can significantly shorten the stabilization period of surgery by removing hydrocarbons and impurities from the implant surface and improving hydrophilicity and protein absorption.

STERLINK's sterilization solution is the world's first direct injection type sterilizer that implements sterilization performance within at least 7 minutes, which is 10 times faster than pouch-type sterilizers. With an impermeable film, aseptic preservation is improved by automatically sealing after sterilizing, and complete infection management is possible by intuitively checking the asepticity (infection status) in a vacuum state.

ACTILINK's regeneration/activation solution differentiates itself from the conventional UV method, which has low permeability, and argon plasma method, which requires removal of wrappers. It regenerates and activates implants by removing hydrocarbons and impurities generated through plasma treatment within a minute before surgery.

Meanwhile, Plasmapp completed FDA certification for the first time for its mini plasma sterilizer which is set to enter the U.S. market. It is also discussing ODM contracts with global medical device manufacturers in the United States, Europe, and Japan, and is continuously preparing to enter overseas markets. Based on this, Plasmapp expressed their ambitions to grow from a preliminary unicorn to a global unicorn.

The MIK(MADE IN KOREA) Hot Spot online exhibition is scheduled to be held regularly according to the field, target market, and participating institutions, and it will be presented as a new type of online business by transforming the know-hows and values of the participating companies according to the trend. Companies that want to participate can apply and apply through the marketing support projects from supporting institutions in the local governments. Refer to the institutions for more information. 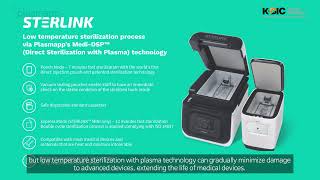