The upcoming card game features a roster of 19 fighters, developed by fans of the original video game series.

"As fans of Under-Night ourselves, we've paid great attention to detail, and we know other fans will find a lot to love in these games."

Under Night In-Birth is a series of fighting games created by Soft Circle French Bread and published by Arc System Works. In the game, players take on the role of humans with unique powers who gather to battle monsters and others like them in a monthly event called the 'Hollow Night'.

In the card game, players will be able to choose from a roster of Under Night In-Birth's nineteen original fighters, each with their own complete deck of cards, special abilities, and fighting style based upon the video games. Players duel on a linear stage, trading attacks in a fast-paced battle until only one remains standing.

The Under Night In-Birth card game is part of Level 99 Games's Exceed Fighting System, which allows fighters from various video game universes to battle one another. Other entries in the series introduce fighters from BlazBlue, Street Fighter, Shovel Knight, and Dead Cells. All of the games are cross-compatible.

"The Under Night In-Birth card game is a fun new way to experience the series for fans of both video and tabletop games." said D. Brad Talton Jr, the designer behind the fighters, "We've built this latest Exceed season to be accessible for new duelists and novel for veterans. As fans of Under-Night ourselves, we've paid great attention to detail, and we know other fans will find a lot to love in these games."

The line will consist of 5 core products, one featuring 2 fighters, and four more featuring 4 fighters each, all starter sets which new players can use to jump right into the game. An additional single-fighter expansion box features Londrekia, the last fighter added to the video game with the release of Under Night In-Birth Exe:Late[cl-r].

Fans of the series will be able to pre-order the games from Level 99 Games's online store (www.level99games.com) starting February 1st. Individual boxes retail at $34.99, and a collector's bundle including the whole roster, a premium playmat, and 19 acrylic standee figures will be available while supplies last for $199. The games are scheduled for a retail release in early fall 2022.

Level 99 Games is an independent studio-publisher creating original board games for a video-game generation.The Level 99 Games team is made up of passionate developers who grew up loving both tabletop and digital games. Founded in 2011, the team has delivered over 15 major releases, including projects featuring popular video game licenses such as Mega Man, Dead Cells, Street Fighter, BlazBlue, and Shovel Knight. 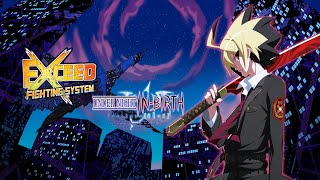 A release trailer for the Under Night In-Birth card game.