Sign up for the 2022 Marvin Hamlisch International Music Awards; deadline for registration is May 31, 2022 with a June 30, 2022 deadline to submit your work. All info at www.hamlischawards.org

Composers are encouraged to compete by registering online for the 2022 Marvin Hamlisch International Music Awards. Registration is open through May 31, 2022. More info at www.hamlischawards.org

NEW YORK, NY, February 10, 2022 /24-7PressRelease/ -- The Marvin Hamlisch International Music Awards selected the amazing award-winning 2015 Dutch short film 'Jonas and the Sea' for its 2022 competition. 'Jonas and the Sea' is a magical short film directed and animated by Marlies van der Wel. The 12-minute long film tells the story of Jonas, a boy who decided early on in life that there was but one place on earth he wanted to be, the sea. Watch the trailer here: https://vimeo.com/272538064

The 2022 Marvin Hamlisch International Music Awards is still open for registration and expanded its competition categories to enable musicians to apply in all of the following musical genres: Contemporary Pop (NEW!), Contemporary R&B (NEW!), Musical Theatre, Film/Media Scoring, Classical Composition and Jazz Composition. Composers worldwide will be eligible to compete in categories for Youth (under 18) and Emerging Composers (pre-professional composers aged 18+) for cash and sponsored prize packages.

All composers from around the world are eligible and encouraged to compete, by registering online now for the 2022 Marvin Hamlisch International Music Awards. Registration is open through May 31, 2022, with a June 30, 2022 deadline to submit your work. All detailed information can be found at https://hamlischawards.org.

The celebrity jury, which will include some of our Honorary Board Members, will be formally announced within' a couple of weeks. Stay tuned! The actual 2022 awards ceremony and concert are planned for Monday, November 7, 2022 in New York.

The Marvin Hamlisch international Music Awards is a New York State registered charitable not-for-profit corporation, governed by a 15-member Board of Trustees with a 25-member Honorary Board of Trustees, comprised of members who were all close personal friends and colleagues of Mr. Hamlisch. The mission of the organization is to foster and champion a new generation of composers through an international music competition with the vision of recognizing talent and building a diverse community of young composers worldwide. 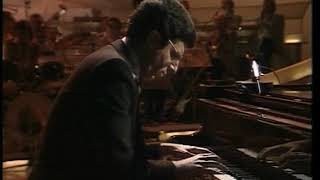 Marvin Hamlisch performing his ‘Nobody Does It Better’, the main theme from the James Bond movie ‘The Spy Who Loved Me’.