Based on a thorough review of Collin County Commissioner's Court records by his campaign team, the following facts are provided.

Judge Self did not receive a pay raise for his first seven years in office. Judge Self voted six times to raise the pay of all elected officials, as required by Texas law. His affirmative vote is a matter of public record.

Following the ambush style slaying of five Dallas Police Officers in 2016, Judge Self contacted the Collin County Sheriff the next day to ensure the Deputy Sheriffs who patrol the county had enough protective vests. Additional vests were purchased immediately along with additional rifles for patrol vehicles. His affirmative vote is a matter of public record.

Keith voted for law enforcements pay raise, not against it. During the September 2011 meeting in question, there were four affirmative votes, including Judge Self's, to approve the pay raise. This is a matter of public record.

According to his campaign team, Collin County's un-precented accolades are directly due to Keith's leadership and understanding of the needs of the county and 3rd Congressional District citizens.

Collin County is one of the fastest growing areas in America. Major corporations have made Collin County home. These businesses are or will be adding tens of thousands of jobs.

Collin County's AAA bond rating is one of only four Texas counties with this exceptional financial strength.

Under his leadership, the court reformed and stabilized the county pension fund.

In recognition of the un-precented leadership he showed as County Judge, he has the strong support and endorsements of a wide-ranging group of individuals and organizations.

"It is my honor and privilege to support Keith Self for Congress. As a close friend of the late former Congressman Sam Johnson, I know that he'd be honored to have Keith Self-serving the citizens of this district. It's wonderful to see that Congressman Johnson's daughter has endorsed Keith Self too." (Cathie Adams, 1st VP of Eagle Forum, former Chairman of the Republican Party of Texas, former Republican National Committeewoman for Texas/2022).

"I enthusiastically endorse Keith Self for Congress. He wore the nation's cloth for 25-years as a Green Beret brother. He has defended this nation and will vocally defend our Judeo-Christian foundations on the floor of the U.S. Congress. I cannot think of a more qualified person to represent conservative Texas values." (SFC (Retired) John Wayne Walding/2022/Celina, TX).

"Keith Self represented Collin County. I watched Keith as the lone voice to question items on the agenda and bring to light many liberty-crushing unintended consequences of such items, as he argued with the president of the council and members. Many times, although Keith was the lone "nay" vote (out of 18), he voted his moral conscience and duty to the Collin County residents he served. Keith has demonstrated his strength and stood for Liberty even though he stood alone. I proudly add my name in support of Keith Self as my congressman for CD3. I encourage other CD3 residents to do the same." (Barbara Harless/2022/Murphy, TX).

I am honored to endorse Keith Self, a true Patriot and defender of American sovereignty, a 25-year Army veteran, for U.S. House of Representatives from the 3rd Congressional District. Keith spent time on the border, angry at the open borders policy and the uninterrupted flow of illegal immigrants across the Rio Grande onto sovereign U.S. territory. He will be a strong voice and vote to secure our borders. (Victor Avila, U.S. Special Agent, Retired/2022).

"Many of you probably don't know Keith Self is a fifth-generation Texan and graduate of the United States Military Academy at West Point. Lieutenant Colonel (Retired) Self served our nation for 25 years as an Army officer, first retiring from active duty in 1999, then recalled to active duty in 2002 – 2003 for service in Afghanistan and Qatar, serving on General Tommy Franks' staff. Keith's assignments included US European Command, Germany – managing the US-Israeli military relationship and serving on the National Security Council (NSC) Interagency Working Group in the White House complex. Keith exemplifies service to others and has dedicated his life to serving. One who did not know him might question why he is volunteering to serve his country again rather than accept a very well-deserved rest and retirement. The answer is simple, Keith loves this country and the Great State of Texas with his heart and soul. He has hope for our country and is committed to ensuring the future is a better place for our children and grandchildren. He is the one man who will represent the 3rd Congressional District with integrity and unflinching courage during the troubling times facing our nation. He is the best man to lead and restore the conservative legacy of Congressman Sam Johnson's 3rd Congressional District. Keith Self is genuinely a Texas Tough Conservative and is worthy of your trust and vote!". (S. E. Haynes, Navy Combat Veteran, Ex-Law Enforcement Officer, Collin County Small Business Owner/2022). 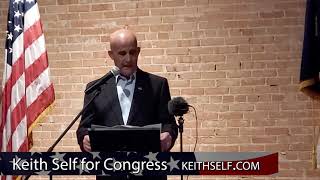