" Jimmie Lee is the greatest street comedian on earth "

Jimmie Lee, known as "The Jersey Outlaw", stars in Dangerously Funny, a reality comedy TV show, with his signature brand of "outrageous street comedy" in the vein of Don Rickles and Rodney Dangerfield. He has performed all over the country, including stops to Hollywood, Las Vegas, New York City, Atlantic City, South Beach, and he filmed in London during Covid. Jimmie's style is very unique in that he interacts directly with his fans on the street and nobody does this style anymore, which has built up a huge following for him.

"I want to entertain and make the people laugh and have fun. I create excitement and pandemonium and mayhem on the streets. I love the old style of comedy I grew with, in the 80s and 90s, and people seem to love it and enjoy the skits I do," he told Hollywood Press in his recent shoot.

And he fit right in on the streets of Hollywood, Venice Beach, and Downtown LA. Jimmie's ability to perform ad lib improv comedy which is right "off the cuff" and his quick wit had the fans totally engaged and entertained throughout the day.

Jimmie Lee performs with his signature look of dark sunglasses and a black leather jacket and an Elvis style hairdo, with the famous security guards. He's quite a character and his charisma and over the top personality are evident, as soon as he starts his schtick.

Val Milano from the Hollywood Times summed it up best, "Jimmie Lee is the greatest street comedian on earth."

Lee was known for pushing through Covid with hilarious shoots that kept comedy alive during a difficult time.

For more on Jimmie Lee, go to… 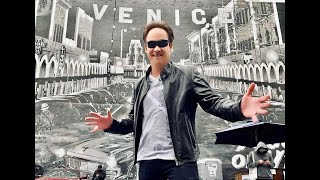