The New Jersey Youth Symphony will donate 25% of its proceeds from the 2022 Playathon event to Doctors Without Borders for their efforts in Ukraine. This will be the organization's second fundraiser for Ukraine this month.

Said Wharton Institute for the Performing Arts Executive Director Peter H. Gistelinck, "Donations can be made at Playathon.Givesmart.com or by texting PLAYATHON to 76278."

NEW PROVIDENCE, NJ, March 23, 2022 /24-7PressRelease/ -- The New Jersey Youth Symphony (NJYS), a program of the Wharton Institute for the Performing Arts, announced today that it will once again support relief efforts in Ukraine by donating 25% of its proceeds received on the day of the 2022 Playathon event to Doctors Without Borders for their efforts in Ukraine. Following its recent donation of $8,865 to Doctors Without Borders from the March 10, 2022 "Together We Celebrate" Gala Silent Auction, this will be Wharton Arts' second fundraiser for Ukraine this month.

Join us for the 2022 "Playathon for Ukraine" livestream on Sunday, March 27 from 4:00-5:30 pm EDT at Playathon.Givesmart.com. The event will feature nearly 450 young musicians performing Pops and Broadway favorites streaming live from the Westfield National Guard Armory. WNYC host David Furst will preside as the event's emcee.

The annual fundraiser raises nearly $100,000 for the organization to support performing arts education, including scholarships and tuition assistance for New Jersey's largest youth orchestra program. To support music education at the New Jersey Youth Symphony and relief efforts for Ukraine, text PLAYATHON to 76278.

The New Jersey Youth Symphony (NJYS), founded in 1979, is a tiered orchestral program offering ensemble education for students in grades 3-12 across New Jersey. NJYS has grown from one orchestra of 65 students to over 500 students in 15 different orchestras and ensembles, including the internationally recognized Youth Symphony. NJYS ensembles have performed in venues including the New Jersey Performing Arts Center, Carnegie Hall, and the John F. Kennedy Center for the Performing Arts. NJYS has received numerous prestigious awards for its adventurous programming from the American Society of Composers, Authors, and Publishers (ASCAP) and has had six European tours, including participation in the Summa Cum Laude International Youth Festival and Competition (Vienna), winning First Prizes in July 2014 and 2017.

The New Jersey Youth Symphony is a program of the Wharton Institute for the Performing Arts. Wharton Arts is New Jersey's largest non-profit performing arts education organization serving over 1,500 students of all ages and abilities through a range of classes and ensembles. In addition to the New Jersey Youth Symphony, programs include the Paterson Music Project, an El Sistema-inspired program that uses music as a vehicle for social change by empowering and inspiring children through the community experience of ensemble learning and playing in its hometown of Paterson. Beginning with early childhood music, the Performing Arts School offers 500 private lessons and group classes each week, ensuring there is something for everyone of all ages and abilities. 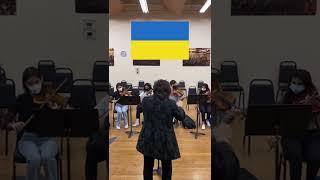