"Lovin' my Elsie Binx. Here's a band forged out of the Motor City. I put Erin Accomando's vocals right up there with Taylor Momsen, Dorothy, and Lzzy Hale." - Screamin' Scott, WRIF 101 Detroit

DETROIT, MI, March 25, 2022 /24-7PressRelease/ -- It's here and it's now; a new breed of music is emerging out of Detroit Rock City primed for world consumption. It's organized, it's powerful, and it's ready to take its position in the public consciousness. From the city that brought you the MC5 and Eminem comes the new vanguard, a new fearless voice to carry the torch again to the pinnacle of rock and roll.

ELSIE BINX. It's rock, it's heavy, it's got a sophisticated sonic fabric with a potency reminiscent of the biggest musical icons and an expressiveness that comes from the influences of Soundgarden, Heart, Van Halen, and P!nk. Elsie Binx is breathing their own fire, exuding their own power, yet it still has that undeniably beautiful Detroit Rock 'n' Roll soul and undeniable ELSIE BINX identity.

After an incubation period of many years recording, releasing music, and touring, ELSIE BINX has hit a new creative stride. Their new MADNESS album reaches another level and finds them transforming upward to a new, vehement chapter.

"The listener better be ready because Madness has 12 tracks with ELSIE BINX front and center, unafraid, courageous in the full sonic display they were meant to be. I've listened to it many times in its entirety with my best headphones. It's contagious and it's powerful," says Matt Jacobs, Rock Island Records.

Music producer Kevin Wesley Williams and vocalist/songwriter Erin Accomando, along with a highly skilled cast of talented players and writers, found traction in the studio in the last few years. It's a new, reinvigorated voice, as if they've hit hyperspeed and have found a new orbit to view the world.

Their compelling chemistry is pushing them forward with a new, unique statement, and they are thriving. With the musical line-up of Jonny Neville on guitar and vocals, Jen Read on keys and vocals, Phil Steuer on bass and production, and Darin Curtis on drums and vocals, the band has evolved an intrepid punch, in both studio and live performance.

"MADNESS makes me feel incredibly excited as we finally put our best musical foot forward into the world. We are speaking up louder than ever before, both lyrically and stylistically. Our discography stands strong, but this release is a whole elevated level of honing our separate instruments into one cohesive sound." - ELSIE BINX lead singer and songwriter, Erin Accomando.

Find it on all your favorite digital streaming and download sites!
Broadcasting Radio Media visit us on ALL ACCESS!

Rock Island Records is a hybrid Multi-Media Multi-Genre Record Label based out of the Midwest. Built to thrive in the digital world with the warmth of analog. 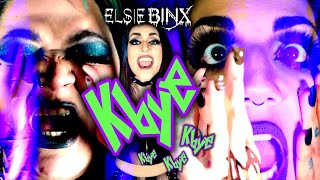