Unjust Justice contains a plethora of exclusive never released interviews and audio statements about incidents in Jimmy's life and a ton of misconceptions finally clarified by reliable sources. Episodes are available on all streaming platforms.

Despite Jimmy's continued success he seemed to never be able to shake the reputation of his past -Don Sikorski. He was constantly proving himself through creating successful artists.

NEW YORK, NY, March 30, 2022 /24-7PressRelease/ -- It's a shame that one of the most prolific self made music moguls in the hip hop industry is currently behind bars serving a life sentence. Since his conviction in 2012 no one has been able to speak with Mr. James Rosemond to get his side of the story or any of the real details on his case. But what the public does know is there has been inconsistent information provided by career criminals, federal informants, along with a strategic plan (by former L.A.Times journalist Chuck Philips), to provide government officials with false and damaging information.

The late actor Michael K Williams a close personal friend of Jimmy's, insisted on hosting the podcast which was recorded in its entirety before his untimely passing. Topics included in the series start from young teenager Jimmy's struggle to provide for his family by hustling drugs in the streets leading up to Rosemond's discovery of his love for the music industry and how he started his record label signing Bryce Wilson forming Groove Theory. This was the pivotal turning point that made Jimmy realize it was time to say goodbye to the drug business as he found a much more satisfying way to earn a lucrative income and remain powerful in the entertainment industry.

He would still be able to maintain a powerful status and his knowledge from being in the streets would help him now be in control in the boardroom. Jimmy had a heavy influence in the industry in a short period of time, his name was known coast to coast as one of the most powerful influential music executives and entertainment managers. Find out how Jimmy became manager to rappers like The Game (one of his most lucrative moves in his career, signed Gucci Mane to Warner Bros, worked with Barry Hankerson, and got on the payroll of multiple record companies. Henchman Entertainment was definitely a hit-making machine.

The podcast series contains an exclusive interview by industry's favorite first black host at 19 years of age at 'Yo MTV Raps', hip hop favorite, Mr. Fred Brathwaite known as Fab 5 Freddy. He interviews Biggie Smalls and Andre Harrell about what really happened that night at Quad Studios in New York City. Allegations that happened that night have plagued Jimmy Henchmen for years. Listen to concealed details the streets weren't putting out and come to your own conclusion. Download the Unjust Justice podcast today. I promise you won't be disappointed.

These first four episodes will dig into the beginning of his career, but you have to keep tuning in because in the next four episodes you will see how investigative journalist Don Sikorski dives deep into the criminal justice system. It's then when you will better understand how it was the deceitfulness and crooked tactics of the unjust criminal system that landed Jimmy 9-life sentences. There is a strong possibility James Rosemond will soon be released. How is that even possible? According to the Washington Post https://www.washingtonpost.com/politics/2021/10/07/james-rosemond-trump-clemency/

What you will love most about this podcast series is special guest "The Rosemond Tapes." These are special recorded conversations with Rosemond from inside a federal penitentiary about various topics surrounding past, present and future judicial proceedings. Currently there are four episodes available for your listening pleasure. https://www.criminalmindedmedia.com/unjust-justice-the-james-rosemond-story/

Jonell PR Brand Management, LLC is a boutique Public Relations company committed to building brands through social media engagement, radio, blogs, publications online and print. Our focus is turning start up brands into household names. Celebrity collaborations with notable brands and spirit brands. There is no business too small to insert a public relations specialist who understands the power of social media. For interview requests or media inquiries please contact [email protected]. 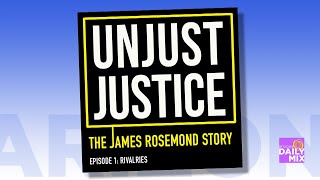 Check out Criminal Minds Presentation of the Unjust Justice Podcast