Why musicians cannot be silent about Ukraine. Singer Kelsie Kimberlin about the speech of the President of Ukraine at the Grammy Awards

Singer Kelsie Kimberlin is convinced that in addition to weapons, which Ukraine undoubtedly needs to protect its people, Ukraine needs music. Music that says that Ukraine is not alone.

Music is always eternal, right? I know how hard it's for Ukrainians who're on the front lines, in bomb shelters, and I appeal to all of you: 'It's not the time, to be worlds apart'. Stand with Ukraine

WASHINGTON, DC, April 06, 2022 /24-7PressRelease/ -- The speech of the President of Ukraine Volodymyr Zelensky at the Grammy Awards has become one of the most emotional in the history of the music ceremony. But beyond emotions, what action should musicians take to stop the war and protect the lives of millions of innocent people?

As Zelensky said, "The silence destroyed cities and killed people… Fill the silence with your music. Fill it today to tell our story… Please support us as much as you can. By any means, but not by silence."

A young American singer, Kelsie Kimberlin, a few days before the beginning of the war, recorded a video with a call to pay attention to the situation that is happening in Ukraine and become a Ukrainian who stood face to face with the enemy.

"I am calling on everyone to take a moment to reflect on what it is like to be Ukrainian, free from war. Close your eyes and imagine our verdant fertile lands long called the breadbasket of the world because we provide sustenance to the planet not only with food, but with goodness, beauty, and humanity. Envision hundreds of miles of glorious sunflowers moving in unison with the sun and then lowering their petals for a peaceful night. Hear the bustling of vibrant cosmopolitan cities and listen as the wind carries the sounds of horses bringing wagons of fruits and vegetables to the village markets. See the children playing and laughing outdoors without a care in the world. This is the Ukraine that awaits us as long as all civilized nations and all civilized citizens on the planet unite in solidarity with us to oppose a broader war and regain our territory. Together, we are all one, because as Ukraine stands, so stands the entire free world," said Kelsie Kimberlin.

Kelsie is Ukrainian-American, and in her posts on social networks, she has repeatedly urged the world to support Ukraine, and every day she does more in order to save the lives of Ukrainians. Kelsie's mother was born in Ukraine and many relatives remain where active hostilities are now taking place.

In her new video for the song "It's Not The Time", which Kelsie released in early March, she honestly admits: "When I was preparing to release my new song, I did not know that a war would happen in my beloved Ukraine, a country where I spent many summers and with my wonderful family and friends. Russia has attacked Ukraine. The world has turned upside down. Everyone's priorities have changed. But music is always eternal, right? I know how hard it is for people who are on the front lines or in bomb shelters, and I appeal to all of you: 'It's not the time, to be worlds apart To be far away, to be gone again, for so many days.' No one can be silent now. Ukrainians must understand that the civilized world is with them. Today, the hope of the whole world lies in one very strong and courageous people."

Kelsie follows the call of President Zelensky and in addition to volunteering (which she does not like to advertise), Kelsie breaks through the silence and appeals to the whole world: "Look at the true story of current destroyed but unbreakable Ukraine."

The singer is convinced that in addition to weapons, which Ukraine undoubtedly needs to protect its people, Ukraine needs music. Music that says that Ukraine is not alone. She will be releasing more music soon to help tell the story. And it's not the time to be apart…

FOR INFORMATION:
Kelsie Kimberlin is a 22-year-old American musician and singer. Her work is not only accessible and entertaining but also steeped with important social themes and dual meanings underscoring her deep understanding of the power of creative music to evoke change. From an early age, Kelsie immersed herself in music, singing in choirs, participating in Yoko Ono's Peace Project, and spending much of her childhood in music studios working on an endless stream of original songs. She participates in every aspect of her art — writing, recording, performing, and filming her videos.

Kelsie has released eight videos over the past year and has built her own audience and an army of fans. Her videos have millions of views on YouTube, and her songs have been streamed millions of times and heard on hundreds of radio stations across the world with each song receiving more radio play. After her song "Bring Together" was released in May, it stayed on the Top 50 Shazam Charts in many cities for over a month, and in the top 20 Rock Radio Chart elsewhere for two months.

Multi-Grammy winner Michael Brauer, who has been working with Kelsie, recently said, "I really enjoy mixing Kelsie's music! Her voice is beautiful, emotional and I believe the story she's singing about. The musicianship and productions are amazing too. I expect her to go all the way, she's the real deal."

One of Kelsie's enduring qualities is her authenticity. "I am who I am, whether on a film set or hanging out with my family. So is my music. A perfectly retouched world doesn't really exist. Sometimes I may be more lyrical and melodic, and sometimes I may speak loudly about my feelings and experiences. But the more openly I face the day, the easier it is to decide what to do to make my tomorrow better than my today."

Kelsie travels extensively, loves all of her 15 animals, and fearlessly shares her views about social injustices. "If I see that I can influence something or someone by sharing relevant information with others, I will do it, whether in my music, online or in my daily life. The only way we can make things better is to speak up, get off the couch and do something positive." 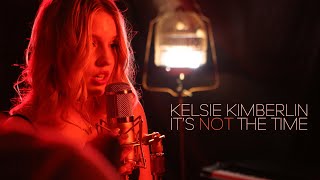