"With a title like this, Kim's special is bound for success!" said Brian Volk-Weiss, Founder and CEO of Com

Comedian and former backup dancer Kim McVicar performs her second stand-up special Tap Dancing on My Mother's Grave, where she riffs about how bad she sucks in bed, really old prostitutes, and, of course, her mother's practice funeral (she's still alive). This unique special has it all, comedy, music, and of course tap dancing. You've never seen a stand-up comedy special quite like this!

Kim McVicar is a comedian and former professional dancer (emphasis on former) originally from Canada. Her last standup special "Kim McVicar: Please Notice Me" can be seen on Amazon Prime, iTunes, YouTube, and many more streaming services. It has been streamed over 5 million times. Fans also can hear McVicar regularly on SirusXM, Spotify and more. Find Kim on TikTok or Instagram at Kim.McVicar. For media inquiries contact Kim's Manager at MVP Sports & Entertainment Management Christine [email protected]

Below is the link to find where to watch Kim McVicar: Tap Dancing On My Mother's Grave
https://www.comedydynamics.com/catalog/kim-mcvicar-tap-dancing-on-my-mothers-grave/

"If you like stand-up and tap dancing, this is the only special for you," said Kim McVicar. 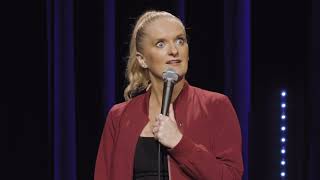