DALLAS, TX, May 27, 2022 /24-7PressRelease/ -- James Kadado solved his first Rubik's cube nine years ago; from that point, he has progressed to designing the surfaces of each Rubik's cube to represent whatever he needs to complete his amazing mosaics, using up to 500 cubes of different patterns. From country's flags to portraits and logos, Kadado has used the famous cube to create incredible mosaics.

In April, Kadado invested in 500 cubes, built a frame, and started making large portraits and logos, increasing his TikTok followers from 10,000 six months earlier to more than 270,000. In April he participated in Game On, a TikTok LIVE competition; a six day-long national competition that awards prizes based on the number of followers gained; he won first place, having gained 65,000 followers (the equivalent of 65 million points).

"I solved my first Rubik's cube in 2013," says Kadado. "I started creating flags using up to 50 cubes and was overwhelmed with requests for more. My TikTok account now has more than 273,000 followers, with many videos on TikTok and YouTube having gone viral, attracting attention from many major brands and celebrities."

James Kadado is a 29-year-old Lebanese American; a full-time digital marketing manager, he enjoys relaxing with his wife and dog in his spare time – when not busy creating content, that is. Major brands that Kadado has created his art for include Toys 'R' Us, the Pittsburgh Steelers, the Detroit Lions, Pepsi, Slim Jim, and many more. 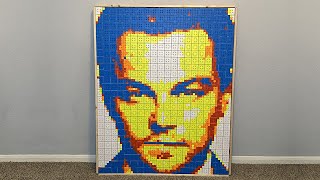