Rich Chambers is giving us something that rock n' roll has not seen in quite some time—energy and fun. It's Rock n' Roll Reimagined.

VANCOUVER, BC, June 07, 2022 /24-7PressRelease/ -- Does anyone still use the term "rock n' roll" anymore? Rich Chambers certainly does. In fact, he specializes in it, bringing us all the fun, excitement, and energy from the early days of rock n' roll in a uniquely fresh way built specifically for the 2020s. This is his signature sound, and it is on perfect display in his reworking of the classic Beatles song, "I Saw Her Standing There." It's Rock n' Roll Reimagined!

A recent review of Chambers' "I Saw her Standing There" in the Turtle Tempo Independent Music Discovery blog sums up his unique rock n' roll edge and personality:

"Some would say that covering The Beatles is brave, others would save its total madness – how can you possibly do a remake of such an iconic band and do it justice?
Well maybe the only way to get away with it is to completely reinvent the track and that's exactly what Rich Chambers has done with his new cover of 'I Saw Her Standing There,' putting a fire in the belly of the track with an intense soundscape of distorted guitars, unrelenting bass, and splashing drums."

Rich Chambers is catching on. His version of "I Saw Her Standing There" reached 100,000 streams on Spotify in less than six weeks after its release, and the unique video, which was awarded best cover video by the Euro Music Video Song Awards, has already picked up over 130,000 views. These are huge numbers for an independent artist as his fan base continues to grow on a global scale. "I love that my music is appealing to people all over the world and from every age demographic, "says Chambers. "Just the other day, I received a message from a 75-year-old grandmother who said her and her five- and seven- year-old grandsons love listening and dancing to my music. That message warmed my heart. Bringing people of all ages together is what music should be all about!"

Chambers has been on a roll recently. Preceding "I Saw Her Standing There" were five single releases since January 2021, including his film festival award-winning video for his original, "I'm So Tired." With more single and album releases planned for the second half of 2022, Chambers is making his rock n' roll mark as an artist to watch for. As one music journalist recently said in the FLEX music blog about Chambers, who hails from Vancouver, Canada: "One of Canada's best-kept secrets, Rich Chambers could easily become a household name in a matter of months!"

With bombastic guitars and a vocal style that oozes rock n' roll, Rich Chambers is giving us something that rock n' roll has not seen in quite some time—energy and fun. It's Rock n' Roll Reimagined. 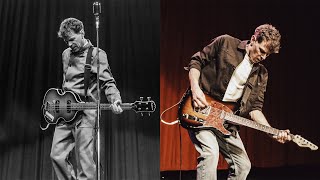