The film is also available to rent or own via streaming platforms, Amazon Prime, Xbox, Google Play, Microsoft Store and Apple iTunes.

"Brilliant… The Scout is a fun, well-acted and enjoyable entry into the slasher sweepstakes." - Michael Klug of Tom Holland's Terror Time

The Scout is the story of an independent film crew, when on a group location scout, are attacked by a mysterious masked killer, who appears "hell-bent" on murdering them one by one.

Anastasia Elfman stars in The Scout, a follow-up to her recent films, Aliens, Clowns and Geeks and Bloody Bridget. Cult filmmaker, Richard Elfman, directed both of Anastasia's previous films. The Scout also features appearances by Carl Crew (1986's cult classic, Blood Diner) and The Radioactive Chicken Heads, a Santa Ana based band that also performs in Elfman's Bloody Bridget. The film was created on "a budget that made shoe-strings seem expensive," says filmmaker, Michael Kallio. "It was as micro-budget as micro-budget can get." The Scout was executive produced by James Cullen Bressack and Warren Croyle. It premiered at Screamfest Horror Film Festival in October of 2021.

"The cast is great…" and "... definitely worth a watch." – Josh Burns of pophorror.com

"Brilliant… The Scout is a fun, well-acted and enjoyable entry into the slasher sweepstakes." - Michael Klug of Tom Holland's Terror Time - www.thterrortime.com

For review consideration, a password-protected screener can be provided on request. Please contact Michael Kallio at [email protected]

Darkart Entertainment and Michael Kallio make all sorts of content from commercials to music videos, TV pilots to feature films. They are currently preparing a Blu-ray release of Kallio's first film, Hatred of a Minute, produced by Bruce Campbell (of the cult film series The Evil Dead), getting the word out about The Scout and wrapping principal photography on the quirky, Christmas rom-com, An L.A. Christmas Story. 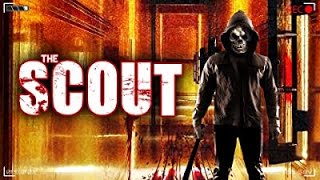