Celebrity Sparring with Jeff "The Liquidator"

A fundraising to support the Canada Youth Team

"These amazing youth have the opportunity to compete in Muay Thai in the Olympics someday, I just want to do my part to help and support them to be a step closer to that dream."

VANCOUVER, BC, July 20, 2022 /24-7PressRelease/ -- Jeff "The Liquidator", the iconic reality tv celebrity who has made an illustrious career in buying and selling almost anything he can flip in the liquidation world, is at it again. For the first time in his career, Jeff will attempt to last 3 rounds against a 5-time Canadian Muay Thai Champion, Adam Blanchette on Saturday, July 23 at 12 noon at 2306 Madison Ave., Burnaby, B.C. This much-talked-about "Celebrity Sparring" is a fundraising event to help support the Canadian Youth Team who will compete in Malaysia for the Muay Thai World Youth Championship Tournament in August. This "underdog" sparring match is causing a buzz on social media and fans worldwide are curious about how this came about.

"We've been training a lot of youth in Muay Thai and we actually have a shot at competing, not only in Malaysia but also in the Olympics. But due to the lack of government support, we needed to raise funds to support the children who will compete, so I turned to Jeff and asked if he could help us," says Kru Jason Fenton, the Director of Operations and Muay Thai Development at the Traditional Muay Thai School.

This may be the greatest underdog match in history with Adam Blanchette having 5 Canadian Championship titles under his belt while Jeff The Liquidator has zero wins, zero loses, zero TKO, and 5 episodes of road rage. This is surely going to be a very interesting and fun sparring event that is surely not to be missed.

"I may not have the proper training for this sparring, but I'm doing my best to get ready not to get knocked out, or even if I do, then it would be for a great cause for the children," jokingly says Schwarz.

Even before the sparring match, interests are already pouring in on how people can help and support the children who will be competing in the Muay Thai World Championship. On July 23rd, all roads lead to the Direct Liquidation store parking to enjoy free hotdogs and drinks and to have fun as Jeff The Liquidator negotiates his opponent to submission.

About Jeff Schwarz, "The Liquidator" & Direct Liquidation: Jeff Schwarz has been in business for more than 25 years buying and selling pretty much everything. From selling valuable assets all over the world to liquidating merchandise in the streets of India, and buying and selling collectible assets in China, Dubai, Canada, United States, and Central America, Jeff has made a name for procuring and selling quality goods. Jeff Schwarz has also had a successful TV show called The Liquidator which is currently featured on Amazon Prime Video and Game TV. The show ran in over 160 countries with over 5 seasons of him doing business liquidating items and dealing with eccentric buyers and sellers. Awarded Top 3 Reality Show in the World at Banff Film Festival, Jeff's motto believes in bringing buyers and sellers together with everyone winning. Jeff is the owner of Direct Liquidation. 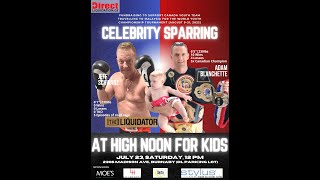