Abandoned for years, the villa of former communist dictator Nicolae Ceausescu in Botosani, Romania has been turned into a shelter for the elderly and homeless after a local journalist made a profession out of helping the vulnerable.

BOTOSANI, ROMANIA, September 15, 2022 /24-7PressRelease/ -- "I used to distribute hot meals to homeless people on the street. Every winter I would see people on the street dying of cold or getting sicker from diseases," Ionela Ivan, the Romanian journalist who decided to help those in need, told HotNews. "The idea of setting up a shelter came as a necessity, an emergency, a vital solution for those who have to live on the streets," she added.

After a long search, Ionela found a villa in a village about 50 km from Botosani, where former communist dictator Nicolae Ceausescu once lived. The villa had been abandoned for years, but Ionela and her husband began paying for its renovation through donations.

Over time, with the help of the Salveaza o Inima (Save a Heart) association and others, they managed to completely renovate it. The three-storey building is now worth around €120,000 and can accommodate 50 people.The first homeless people arrived at the Nicolae House in December 2021. Currently, 25 of them live there. Most have health problems, while others are seriously ill.

"We have to regularly call an ambulance for those we can't take to hospital ourselves," said Cristian Ivan, Ionela's husband.

The home has a nurse and a social worker who provide residents of the Nicolae Home with basic medical care and meals. A rehabilitation centre and clinic in Botosani have also offered to provide residents with free physiotherapy and blood tests.Some of the older residents help the newcomers. Costică, who was evicted from his apartment, has been living on the streets for 12 years. He now feeds and washes those who can't do it themselves.

Feeding one of the 25 current residents costs Casa Nicolae at least 400 lei ($82) a month. The damaged roof also needs repair. Those who want to help can make a donation here.

https://www.asociatia-happy.ro/en/donations/sprijin-pentru-casa-nicolae/ or you can book a hot meal online for these old people. 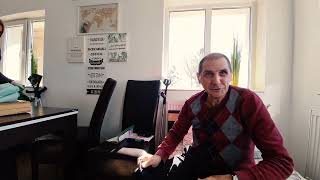