'Denim and Praise' Gospel Extravaganza Returns to Memphis, Honoring Teachers Along the Way

It's not just a phrase; it's a language that speaks to all people.

MEMPHIS, TN, September 22, 2022 /24-7PressRelease/ -- Denim and Praise is back and it's taking Memphis by storm. Not only is it bringing the best of the best in urban and conventional gospel music—featuring headliner and six-time Stellar Award-winning gospel artist, Deitrick Haddon—it will also recognize the relentless commitment and sacrifice that teachers of Memphis make every day.

Not only was Mrs. Clark a talented musician, but she also had a burning passion for education. For decades, Fannie Clark gave back to her community through teaching. She was a primary school teacher at Newberry Elementary School and taught in public schools for 41 years before retiring in 2000.

The Tennessee Mass Choir, now under the leadership of her youngest son and Grammy-nominated music producer, Jason Clark says that teachers deserve more than thanks. "With all that educators face today, they should be honored for the selfless contribution they make to the world…therefore, we will recognize them on this day."

Denim and Praise: The Blue Jean Praise Party, which will take place on September 30th, will honor educators at the event and gift some Memphis teachers with a relaxing spa day and pedicure at a local salon.

Denim and Praise will headline six-time Stellar Award-winning gospel artist, Deitrick Haddon, who uses his musical talents to connect with today's youth by interweaving hip-hop, rock, and pop into his music—a language that most youth of today can relate to.

Put on your best blue jean outfit and join us for a night of great music, high praise, and heartfelt worship at Denim and Praise: The Blue Jean Praise Party, to be held at 7:00 PM, Friday, September 30th at New Salem Baptist Church, 2237 South Parkway East in Memphis, TN.

High-energy vocals performed by a powerfully gifted, versatile and spirited group of individuals. The Tennessee Mass Choir has been recognized as one of the finest, most respected and talented Mass Choirs in the entire country. Under the leadership of award-winning, GRAMMY nominated music producer Jason Clark, this choir has shared the stage and recorded with notable artists such as Fred Hammond, John P. Kee, Al Green, Jekalyn Carr, Martina McBride, Foreigner, St. Paul and The Broken Bones along with countless others. 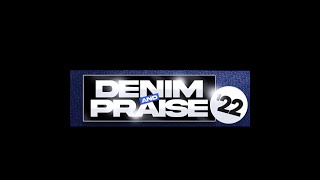 Put on your best BLUE JEAN outfit and join us for a night of GREAT MUSIC, HIGH PRAISE and HEART-FELT WORSHIP at DENIM and PRAISE