With music placed on over 230 TV shows and films, DownTown Mystic has become one of the top sync-licensed artists creating music today

NEW YORK, NY, October 07, 2022 /24-7PressRelease/ -- Sha-La Music Inc. announces the release of the new single Superstar by US Roots Rocker DownTown Mystic on October 14. The single will be digitally released to Radio on October 10 via iPluggers and distributed worldwide via The Orchard/Sony Music. Pre-orders are now available on Amazon and Apple Music.

Superstar is the 2nd single to be released off the upcoming AmeriKarma album. It follows the 1st single Fly, which has garnered airplay on over 150 stations in 25 countries, including 30+ AAA/Non-com stations in the US. The Superstar single contains 2 mixes and features Steve Holley (Paul McCartney, Elton John) on drums & harmony vocals with urban legend Paul Page (Ian Hunter, Dion) on bass and keyboard wizard Jeff Levine ( Joe Cocker, Hall & Oates) on hand for the To Sir Elton With Love Mix. The track was mastered by mastering legend Leon Zervos at Studios 301 in Australia.

Superstar has a totally different vibe and sound from the retro-chill of Fly. Co-written with G.T Sullivan, the single is a rocker featuring a glam meets punk sound that recalls the heyday of rockers Elton John, David Bowie and Marc Bolan. DownTown Mystic writer/producer Robert Allen comments, "After we recorded the track there was something that made me think of early Elton with touches of Bowie & Bolan, which took me by surprise. So I thought why not explore those influences further".

DownTown Mystic started 2022 with the release of the critically acclaimed 21st Century Rock 'n Roll album, making his musical statement on the venerable genre. At the same time, the artist began recording the AmeriKarma project. The plan is to release singles as a build-up to the album release next year. Robert adds, "The new project is so different from any of the other releases. I'm very excited about these songs and getting them out in the world".

Besides having success at Worldwide Radio, DownTown Mystic's biggest and most improbable success has been in one of the hottest and most competitive areas in the music biz—Sync Licensing. With music placed on over 230 TV shows and films, DownTown Mystic has become one of the top sync-licensed artists creating music today.

"If names like The Rolling Stones, Tom Petty, Buffalo Springfield and Bruce Springsteen have occupied any significant time in your life, well, DownTown Mystic most certainly should be on regular rotation, too." Take Effect Reviews.com

"DownTown Mystic is at the dawn of a new era in his career." The Static Dive 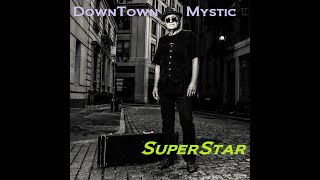