A Weakened Regulatory Environment, the failure of 7 Major Insurance Carriers, billions in unpaid claims, sharp increases in insurance rates and rent, and a powerful, corrupt Insurance Lobby within the current adaministration as a root cause

Florida is home to nearly 4 million independent non-affiliated voters, and in the past two decades, those registrations in Florida have increased from 16 percent of registered voters to 28 percent, an increase of about 2.4 million. Those Independents outnumber registered Republicans in 5 counties — Broward, Miami-Dade, Orange, Osceola and Palm Beach, and they outnumber registered Democrats in 12 counties — Bay, Charlotte, Citrus, Clay, Collier, Lee, Martin, Nassau, Okaloosa, Pasco, Santa Rosa and Walton.

"We believe that throughout his life, Adam Hattersley has demonstrated integrity, dedication to public service and advocacy for all Floridians, not just those of his party" Independent Party Chairman Ernest Bach stated. "Independent and unaffiliated voters make up nearly a third of the entire electorate here in Florida, and will play a decisive role in this election, so I'm honored to have the endorsement of the Independent Party" Hattersley said.

Adam is a Navy Veteran who volunteered for duty in Iraq and was an instructor at the US Naval Academy before successfully running in 2018 for a House District in Hillsborough County that had previously gone for Donald Trump, and flipping the seat for the first time in nearly two decades. "This endorsement for the kind of elected official Independents seek comes after Hattersley has traveled to nearly all of Florida's 67 counties over the last 8 months and received positive feedback," Bach said.

The Independent Party will be hosting a press conference with the candidates and more details of it's endorsements on Friday October 28th at 5:30 PM prior to the FL NOW Annual State Conference at the Florida Hotel and Conference Center, 1500 Sand Lake Rd. Orlando, hosted by the National Organization of Women.

The FL Independent Party, with approximately 250,000+ in its membership, in addition to its influence within the Non-Party Affiliate (NPA) voting block, is announcing its endorsement of Adam Hattersley, Democratic nominee for Chief Financial Officer. Ernie Bach, longtime chairman and former Republican operative and staffer, is seeking to answer media inquiries regarding the endorsement, its impact upon our property insurance crisis, and the current corruption running rampant through the Office of Insurance Regulation, and subsequently the current CFO's administration, led by incumbent Jimmy Patronis. 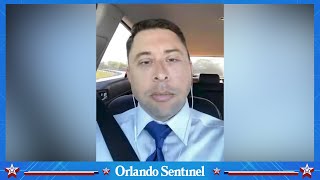