"We are so grateful and humbled by the immense, diverse and extremely successful participation of 500+ composers in all music genres out of 40+ countries," said Betsy Walters and Peter H. Gistelinck.

NEW YORK, NY, November 14, 2022 /24-7PressRelease/ -- The enduring legacy of one of America's most decorated composers has been the basis for launching the Marvin Hamlisch International Music Awards, aimed at recognizing and enabling the next generation of music composition talent. It was shortly after graduating from Queens College—a founding partner of the awards—in 1967, that Hamlisch produced his first of more than 40 motion picture musical scores.

Composers from around the world were encouraged to compete, by registering online. "We are so grateful and humbled by the immense, diverse and extremely successful participation of 500+ composers in all music genres out of 40+ countries," said Betsy Walters and Peter H. Gistelinck, Co-Founding Board members of the Marvin Hamlisch International Music Awards. "We are so thankful to all of our celebrity presenters for their unconditional support and are thrilled that, especially in these continued challenging times, they are able to make such a difference in memory of the legendary Marvin Hamlisch."

"I speak for everyone at Queens College when I say that we are so proud to call Marvin Hamlisch an alumnus," said Queens College President Frank H. Wu. "More than ten years after his passing, Hamlisch continues to impact the lives of so many through his work. We are honored to partner with the Marvin Hamlisch International Music Awards for this incredible event. Although this year's celebration is again presented virtually, it is sure to be an exciting evening filled with memorable appearances and wonderful music."

The celebrity presenters for the 2022 Marvin Hamlisch International Music Awards, who will announce the nominees as well as the ultimate winner in each of the following categories, are as follows:

The actual 2022 awards ceremony is planned for Monday, November 21, 2022 @ 7pm EST and will be streamed live at www.hamlischawards.tv

The Marvin Hamlisch international Music Awards is grateful for the support of its founding partners: Queens College, Concord, Caroline's Cakes, ASCAP, Hal Leonard, Orange Tree Samples, MOTU, Embertone and Score a Score. Their generous contributions help expand the impact of the Marvin Hamlisch Scholarship fund at Queens College for many years to come.

For more info about the contest and 2022 Awards Ceremony, visit www.hamlischawards.org.

For more info about the 2022 nominees, visit www.hamlischawards.org/2022nominees

The Marvin Hamlisch international Music Awards is a New York State registered charitable not-for-profit corporation, governed by a 16-member Board of Trustees with a 26-member Honorary Board of Trustees, comprised of members who were all close personal friends and colleagues of Mr. Hamlisch. The mission of the organization is to foster and champion a new generation of composers through an international music competition with the vision of recognizing talent and building a community of young composers worldwide. 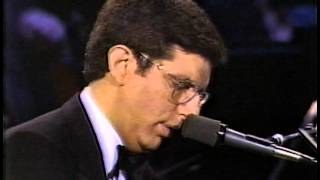 Marvin Hamlisch performs “If You Really Knew Me” from his musical “They’re Playing Our Song”.