Academy Award-nominated actor Josh Brolin narrates "Ground Swell: The Other Side of Fear" feature documentary heading to movie theaters starring the best big wave surfers in the world, including the 100-foot wave from Nazare, Portugal!

"Dare not to be moved" – says Chas Smith of Beach Grit. leading surf site, about "Ground Swell" big wave movie heading to the big screen, narrated by Josh Brolin with the 100' wave.

"GROUND SWELL: THE OTHER SIDE OF FEAR"

BIG WAVE MOVIE HITS THE BIG SCREEN – THE WAY IT SHOULD BE SEEN!

NARRATED BY JOSH BROLIN AND FEATURING THE BEST BIG WAVE SURFERS IN THE WORLD AND THE 100' FOOT WAVE!

"As satisfying as it is terrifying" – Matt Warshaw, Legendary surf journalist/historian

"Dare not to be moved" – Chas Smith, Beach Grit


TAUBLIEB Films continues to create compelling, award-winning content across all platforms, including bringing big wave surfing to the way it's supposed to be seen with "Ground Swell: The Other Side of Fear" – on the big screen! It rolls out starting January 20th, 2023 in theaters across the country, and later worldwide, with upcoming premieres in London, Lisbon, Berlin and Durban.

"Ground Swell: The Other Side of Fear" is a feature documentary that takes you on a cinematic thrill ride as the best big wave surfers in the world tackle the biggest, most fearsome waves on the planet. Directed, written, and produced by multiple Emmy award-winning filmmaker Paul Taublieb, "Ground Swell" is narrated and Executive Produced by Academy Award-nominated actor Josh Brolin, and features Nic Von Rupp, Matt Bromley, Kai Lenny, Makua Rothman, and Bianca Valenti, along with a special appearance by Vini Dos Santos and what might be the legendary 100 foot wave ridden in Nazare, Portugal!

TO SEE THE TRAILER AND TO FIND A LOCAL THEATER GO TO WWW.GROUNDSWELLFILM.COM

Rave reviews are coming in for "Ground Swell." Matt Warshaw, legendary surf historian said, "Paul Taublieb has been producing top-quality work for years and years, and 'Ground Swell' is his best to date. As satisfying as it is terrifying!"

Sam George, director of the Emmy-winning documentary "Hawaiian: The Legend of Eddie Aikau," wrote, "The big wave surfing in 'Ground Swell' is so spectacular, so immersive, and so scary, that while watching you find yourself holding your breath and wondering how the heavy water surfers can possibly hold theirs in, around, and under five and six-story tall waves."

Chas Smith, head of Beach Grit, the biggest surf website in the world, wrote "Giant waves and incredible storytelling…dare not to be moved."

The film was filmed on location on an all-time monster day at Nazare, Portugal, and also at fearsome Jaws on Maui, the fabled Pipeline on the North Shore of Hawaii, and the sometimes deadly Mavericks in Northern California. With insightful, in-depth interviews, combined with bleeding-edge visuals, the film is an exploration of how big wave surfers battle fear in search of the ultimate thrill – and how what they experience can be an inspiration for everyone. "You'll find the best times of your life on the other side of fear," explained featured surfer, South African Matt Bromley.

"Big waves were meant to be seen on the big screen, and 'Ground Swell' harkens back to the days when surf movies were four-walled and played in theaters," said Taublieb. "And it's the first time ever the monsters at Nazare will be shown in a big-screen theatrical setting!" Taublieb's other work includes producing the Emmy-winning ESPN 30 for 30 "Hawaiian: The Legend of Eddie Aikau," and other work he's directed, written and produced include the Emmy-winning "Unchained: The Untold Story of Freestyle Motocross" and the acclaimed NASCAR-related documentary, "Blink of an Eye," as well as producing the feature film, "The Vow," starring Channing Tatum and Rachel McAdams. The company also produces branded entertainment for numerous companies from Ferrari to Monster Energy, as well as viral and short-form content, with Susan Cooper serving as company partner and Executive Producer on all projects. 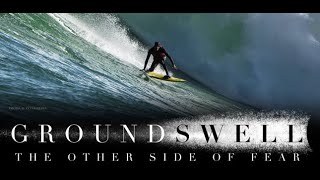 Trailer for "Ground Swell: The Other Side of Fear" - big wave movie goes to the big screen, narrated by Josh Brolin.