Featuring the hits "Perfect World" and "Arrow Thru Your Heart"

Its release coincides with the 50th Anniversary of the original California's signing to Laurie Records.

DENVER, CO, January 19, 2023 /24-7PressRelease/ -- Fresh off an unprecedented run of nine consecutive #1 international hits on the Radio Indie Alliance chart, veteran singer/songwriter Les Fradkin and his wife and creative partner, Loretta Pieper Fradkin, resurrect California – the name of Les's classic 70s and 80s band – for their latest album whose very title, "California Loves You", reflects their sunny and infectious optimism as they chronicle the stages of a modern-day romantic relationship.

Its release coincides with the 50th Anniversary of the original California's signing to Laurie Records, well known for its recordings by Dion and Gerry and the Pacemakers. The album's summery lead single "Perfect World" – recently broke through in 2022 on the Billboard charts, rising to #70 on the Top 100.

To celebrate the 50th anniversary of the band, this album incorporates both radio and chart hits from California and previously unreleased material from 40 and 50 years ago, featuring guests Denny Seiwell, Randy Edelman and Mick Ronson, which has been re-dressed with new optimistic lyrics, the addition of Loretta to the vocals and new mixes and production. The Production merges two time distant elements into one seamless presentation so, in effect, "the music is new, whenever it was written or recorded".

Hear it at Spotify: https://open.spotify.com/album/4s9Q8KfBf6z03LQrekNh6O?si=Y8meQ_DeQw2q0LVLuhPpywp

Buy it at Bandcamp: https://californiatm-featlesfradkin.bandcamp.com/album/california-loves-you 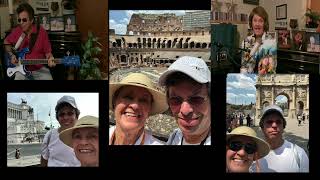 The Top 70 Billboard Hot 100 hit from “California Loves You”!