Meet Anasseril E. Daniel M.D.: How One Author Is Shining the Light on the Problems That Exist Within the US Jails and Prisons

Most suicides are preventable if the correctional staff are perceptive of inmates' emotional and behavior needs and if they follow policies, procedures and practice in a timely manner.

COLUMBIA, MO, January 19, 2023 /24-7PressRelease/ -- It should come as no surprise that U.S. Jails and prisons are run poorly. While rehabilitation should be the goal, the correctional system is often run as a business, where the inmates are considered a commodity. Since the rehabilitation of inmates is a low priority there is barely enough funding available for adequate medical and mental health care. With this lack of concern, there is a much bigger problem. Suicide!

Suicide is the number one cause of death in U.S. jails and number three in U.S. prisons. According to the New York Times, jail is often a death sentence for many Americans. Jails in many cases violated minimum safety standards or failed to provide adequate medical and mental health care for their inmates, about two-thirds of whom are awaiting trial and presumed innocent.

Anasseril E. Daniel, M.D. has several decades of experience in correctional psychiatry. His knowledge and experience more than qualifies him to discuss mental health and program issues within the prison system. He provides valuable insights, tips and guidance on how to prevent suicide and save lives in his book, Suicide in Jails and Prisons: Preventive and Legal Perspectives. The book is a must-read for both professionals and the public who are interested in learning the what, when, why and how of inmate suicide and the ways in which the U.S. correctional system fails to protect the lives of its inmates. The legal ramifications and both the emotional and financial consequences stemming from these deaths are staggering to say the least.

Dr. Daniel declares: "Most suicides are preventable if the correctional staff are perceptive of inmates' emotional and behavior needs and if they follow policies, procedures and practice in a timely manner."

Considering the increasing suicide rate among inmates during the last few years, one would think of the tragic tale of Kalief Browder. This young man was wrongfully accused of stealing a book bag and was sent to Riker's Island to await trial (which never came) where he spent nearly two years in solitary confinement. After he was released (never convicted and without an apology from the state), he would eventually take his own life due to the years of mental and physical abuse he endured while incarcerated.

That is just one story of many similar cases where the prison system has failed its inmates, many of whom are not even convicted and just can't afford bail while awaiting trial. In these situations, suicide often seems to be the only viable escape. Dr. Daniel's book not only sheds light on the problems that exist within the prison system, but also on solutions. He offers plenty of insight to readers who will gain vast knowledge from his book, such as:

4. Preventative steps to save lives

6. How to be an effective expert witness

7. How to select an expert consultant and/or witness

Other special features of this book include:

· Emphasis on correctional officers' role when it comes to prevention

· Combination of both prevention and legal aspects of suicide

· Description of a methodology for experts to analyze all legal claims

· Highlighting for readers (based on case histories) what could go wrong in the management of suicidal inmates and the legal process as it offers possible solutions.


As you can see, there is a lot in this book to unpack; a lot of eye-opening revelations for readers to bear witness to. Dr. Daniel has compiled a thought-provoking work that will surely spark conversation on a subject matter that needs more attention.

To learn more about Dr. Daniel's thought-provoking work in this field, be sure to look out for his 3 Hour Webinar on Suicide in Jails on June 8, 2023. It will be organized by the Missouri Institute of Mental Health, St. Louis, Missouri.

Dr. Daniel's book, Suicide in Jails and Prisons: Preventive and Legal Perspectives, is available on Amazon.com and www.ingramspark.com 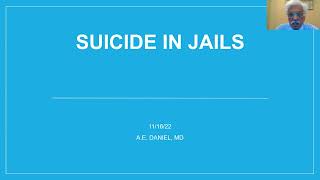