Bianca Ryan and Boogie Long Star in We Are Kings Movie

Winner of America's Got Talent stars in first movie.

Wait a second. Some Southwest Airlines mileage and a credit card. Is that all it takes to green light a movie these days? Major studios beware!

NEW YORK, NY, November 09, 2013 /24-7PressRelease/ -- The question is, how did they do it? We Are Kings is a sprawling road movie musical that tells the story of a broken down bluesman that seeks, and finds, redemption on the road.

But for the producers of the movie it was a bumpy road indeed.

The lead actor in the movie was to be legendary bluesman Magic Slim. But after years of preparation in November, 2012, Magic became ill and was forced to withdraw from the film. Slim was to pass away just three months later. Without a lead actor, and without Magic's music, the film was floundering, the producers disheartened, and the investors disappeared.

Sometime in early December writer/director Toby Hubner, already two years on the project and now with a crashed movie on his hands, walked into Clint Eastwood's movie Trouble with the Curve and noticed a bluesman playing in the background behind Justin Timberlake... There was something about his face, his electric expressions... It was Sammy Blue. Hubner tracked down Sammy Blue in Atlanta, who told the producers he would love to play the lead, but because of his schedule the movie would have to start in three weeks in early January.

It was impossible. There was no money to make the movie, all the available cash had been spent on preparing the movie with Magic Slim. And to pre-produce and plan a movie musical in three weeks was the equivalent of cinema suicide.

The movie was complicated further by a vintage 1975 Winnebago that had to make the trip from Mississippi to Chicago and back. The film had a ghost character as well and its appearances required potentially hugely expensive special effects.

And then there was the music. We Are Kings was a musical and it required original music and there was none to be had...Magic Slim's song catalogue no longer fit the movie without Magic. And none of the other performers even knew the movie had a start date.

But start it did, thanks to a little envelope that Hubner discovered randomly in his mail. Inside was a huge bonus of Southwest Airlines mileage accompanying a Southwest Airlines/Chase credit card. That officially launched the movie. Wait a second. Is that all it takes to green light a movie these days? In 2013 that's Filmmaking 101, and major studios beware. The barriers to entry are coming crashing down, and We Are Kings is a case in point.

Because of its low, actually "no" budget, the project had no movie names. It did however have music celebrities, including Bianca Ryan, the winner of Ameria's Got Talent at age 11. Sammy Blue was a popular Atlanta bluesman, and Rita Graham was the legendary Diva who performed with Harry James and Mercer Ellington and was one of Ray Charles' original "Raelettes". Pryce Watkins was an up and coming rapper in Atlanta. And then there was Jonathan Boogie Long, the movie's wild card blues phenom. Known as the Baton Rouge Blue's Explosion, Boogie would go on, after the movie wrapped, to open for B B King at age 23. Some are already hailing him as the next Stevie Rae Vaughn.

We Are Kings is a testimony to what can be done on a low budget by huge talent. Needing a crew of 25, the movie started with a crew of six that included a photographer, a sound girl, and four students. With original music to be recorded and THEN performed in the movie, director Hubner threw a dart at the Normal, Illinois yellow pages and located by total chance Eclipse Studios in a strip mall close to where the production was located. Its owner, Erik Nelson, turned out to be a Quincy Jones type music polyglot, mastering a half dozen instruments and sophisticated recording software. The recording results of his two room studio at the edge of a cornfield rivalled huge complexes in New York and Los Angeles.

Somehow, the film started principal photography on January 8 with a six person crew.

The cast was flown in to Chicago and chauffeured south (by the students) to the Super 8 Motel in El Paso, Illinois. The production's canteen became the local restaurant next door, home cooking provided courtesy of its owner, a Greek lady named Rosa. The local farmers were puzzled. A movie's come to town? Eureka High School and the local bowling alley provided students and bowlers as extras.

The Indian owners of the motel, virtually empty in sub zero January, allowed the filmmakers to turn the premises into a virtual studio. Huge extension cords were strung into a corn field a half mile away for location lighting. The producers requested that they transfer the whole contents of several rooms to a location. "This is a very strange request, but it seems good for business" Vic Patel, the motel's owner, reacted.

Director Hubner was terrified that the Winnebago, unregistered and uninsured, would be pulled over by the local police and impounded. That would be the end of the road movie. But the enthusiastic El Paso Police threw in with the film, and a local officer became an actor, and supplied police station, police car, and police dog all free of charge.

Inspired, the cast met for breakfast two days into the shoot and started writing songs. On napkins, in their rooms, overnight, padding around the Motel 8 in frigid El Paso, exchanging notes, playing their guitars, singing, and creating what would turn out to be compelling original music that was then performed in the movie. Complex, original songs with arrangements that could have required months in industry studios. The recordings were done in three days.

We Are Kings is an angel story...and will be dedicated in part to Magic Slim. Slim, among other angels, got the movie made.

We Are Kings is nearing completion with only 60 days until its first screenings in January. Already there is talk of a TV series spin off, as well as a stage musical adaptation. It all goes to show what you can do with a lot of determination, and just a little money...

We Be Kings LLC is the producer of the film. Cast available for interviews. 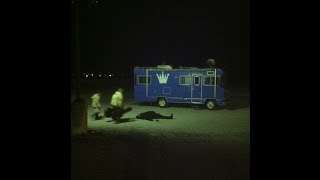 Pre release trailer for We Are Kings