How Can I Increase My Press Release Visibility by Giving it an Angle to Which People Can Relate? NEWSJACKING -- What is it? 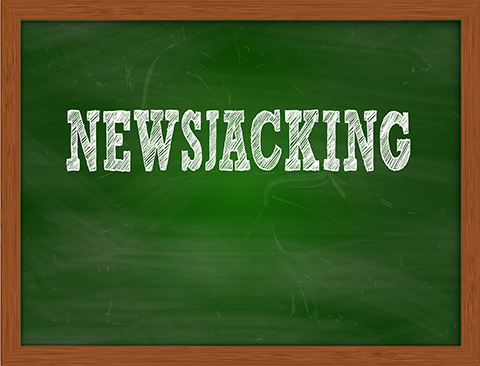 If your career is within the marketing and communications industry and you work for a decent sized business, you no doubt are familiar with the press release. If, instead, you are a business owner with a job title of "Jack of all Trades," you may not be as familiar with the purpose of a press release and how it should be written.

One way 24-7 Press Release Newswire could answer this question is by saying a press release is an announcement targeting the media in order to announce something newsworthy. A better, more accurate definition may be found at Wikipedia. It says, "A press release, news release, media release, press statement or video release is a written or recorded communication directed at members of the news media for the purpose of announcing something ostensibly newsworthy. Typically, they are mailed, faxed, or e-mailed to assignment editors and journalists at newspapers, magazines, radio stations, online media, television stations or television networks."

The origin of the press release, and who first used this form of communication (Ivy Lee), was discussed briefly in our last posting titled "What is the Role of Public Relations, Communications and Marketing? Where Does a Press Release Fit Into the PR Picture?"

Basics of Writing a Press Release
Writing a press release is a unique craft, which typically begins with an eye-catching headline typed in bold. This is followed by your dateline information. What is a dateline? A dateline is a geographic locator at the start of a press release or news article. At 24-7 Press Release, prior to distribution of your press release, when filling in the information, you are asked for the dateline) which typically looks like NEW YORK, NY, June 12, 2017 /24-7PressRelease/ --

More information on the dateline may be found at Classroom, by Kingston Lee "How to Write a Dateline".

There is definitely a certain structure to writing your press release that should be followed. 24-7 Press Release Newswire reviews hundreds of press releases per week and sees some amazing press releases that follow proper press writing structure and include all the pertinent pieces. Pertinent pieces include your headline, subhead/summary, first paragraph, secondary information, boilerplate, contact information and any multimedia.

24-7 Press Release Newswire has recognized wikiHow as an excellent resource for mastering the writing of your press release, with no shortage of details.

Press Release Strategies
There are many different strategies that may be used to write your press release. Some companies will work together where they mention other businesses with whom they have a complementary relationship. In return, those companies will make a mention back in their next press release (kind of a tit for tat, you rub my back, I rub yours) type of strategy. This is an excellent way to get in front of the media from different sources.

Another strategy that some companies use is called Newsjacking. Newsjacking is the practice of capitalizing on the popularity of a news story to increase your own sales and marketing success. When using a newsjacking strategy, you dovetail your news with your competition's news or simply a hot news topic that is getting a lot of attention, in order to gain media attention for your business as well. If you are attentive and quick to the punch, you can capitalize on this news as fast as it becomes available.

An example of this could be taking a breaking news story about an existing product from a large, well known company and including or making mention of information about that product or company in your own story. This could include information about trends or major events that increase the demand for your products and services. To illustrate with an extreme example, let's say you are in the earthquake preparedness kit business and scientists have just issued a release saying there is increasing seismic activity in your area. If your business is earthquake preparedness kits, you could news jack a story about this recent announcement while making mention of your own product or service as long as it is something newsworthy and of benefit.

When newsjacking, think about the timing of your story, so that is still of immediate interest to the audience that read the original story. Be tactful, especially if your story is related to a story from a competitor. Also, be sure that your news is truly related in some way to the original story. News jacking a story that has nothing to do with your press release can only lead to confusion.

There is a life to every story. The life cycle of a news story typically follows these stages:

1. The event itself that is newsworthy
2. If the subject is a catastrophic event there would be many calls to emergency services, which are typically monitored by the media.
3. Breaking news hits the internet, television, radio, social media, etc.
4. (Now is the time to newsjack)
5. Journalists scramble for additional information and new angles of the story, such as localized aspects of the story
6. Public interest (or excitement) grows
7. A peak is hit
8. Now considered old news
9. Done

For the full details of the lifecycle, we recommend reading a brilliant article, written by Corey Wainwright over at HubSpot about The Inbound Marketer's Complete Guide to Newsjacking.

News and press releases in your industry are almost always continually breaking and keeping on top of them is important. You should know what is happening within your industry, particularly when there are excellent tools like Google News Alerts where they will send you information as soon as it is published.

When you are notified of a breaking news story, you need to act fast and start your research and reading. Hone in on what other people are saying, then write swiftly but accurately about your subject. Knowing what other people have talked about and discussed gives you the opportunity to be original. At this stage, differentiating yourself is important.

Although organic search results will assist in your online visibility, marketing what you have written will be key. The first, and a great place to start, is social media. When you tweet your information, don't forget to use the hashtags that have already been established about the trending story!

When you distribute a press release through a press service like 24-7 Press Release using the premium Mass Media Visibility package, your news goes directly to a network of journalists quickly. When you newsjack, you can quickly receive results past the journalist view and social media levels, including better visibility within search results because the hot trend that you have newsjacked has rapidly become popular within the search engines.

You must remember one important detail. Timing is everything and you must act quickly to get your release out. If someone else beats you to the punch, your press release will be seen merely as a "me too" type of a press release, as mentioned in 'Newsjack Like a Pro With These Secrets' over at Forbes.com.

Risks of Newsjacking
Typically, when you send out a regular press release about some type of product announcement and so forth, without newsjacking a story, you write your press release, send it and it just goes through its steps. Caution must be taken when you are newsjacking, particularly if it is a touchy subject. We have mentioned about how newsjacking can be successful, however we have not looked at how sometimes this can lead to a bad situation.

A case example is in an article at Forbes.com that talks specifically about a fellow by the name of Andy Hallinan. Four days after the shooting of military personnel in Chattanooga, Tenn., the Florida gun store owner declared his shop a "Muslim-free zone." Illegal? Probably. Newsworthy? Definitely. USA Today, Newsweek, CNN and other outlets jumped in. Hallinan offered no details on how he would enforce his ban on Muslim customers or whether he would stand his ground in the event of a legal challenge, but he accomplished his goal of generating press for his business."

As the Forbes.com article explains, due to the heated type of content and the lack of specific details, this type of a press release could have gone south very rapidly. Some may argue that any press is good press, however do you really want to open that can of worms?

Ensure you are dignified and diplomatic. Be upbeat and positive, never mean or vindictive. Write articulate text in full sentences, without chatty slang, industry jargon, corporate gobbledygook or social media shorthand and don't get too cute or clever, especially where human suffering is involved.

Much of this is just common sense for the writing of any press release. A subject we have touched on briefly in the past in our articles section.

We do not have any specific dedicated articles on the basics of writing a press release and therefore would refer one to an excellent article at CBS Moneywatch titled 'How to Write a Press Release, with Examples'.

A Newsjacking Re-cap
Relative to the press release and communications industry, Newsjacking is a fairly recent strategy pioneered by David Meerman Scott. At 24-7 Press Release Newswire we talk with many individuals in the industry on a daily basis and recommend that if you make an attempt at newsjacking that you at least have some good experience already with the writing of a press release. We would also couple this with some good knowledge of social media marketing. If you are not familiar with social media marketing, you should check out this article from Search Engine Land titled, 'What Is Social Media Marketing' and brush up on your skills.

As we have seen, done correctly and tastefully, you can certainly reap some excellent benefits in the spotlight. However, if you rush too quickly and do not have much experience, you may find yourself saying "well isn't any publicity good publicity?" Be careful -- you might need a big firehose to put out the fire!