"Rise of Rome," a New Mobile Strategy RPG is Taking the Gaming World by Storm!

Rise of Rome is a new strategy game by RNTS Media which allows players to become a true "Roman hero" by leading armies to battle and conquer lands in the name of the Roman Empire.

SEOUL, KOREA, August 12, 2014 /24-7PressRelease/ -- RNTS Media is delighted to announce the launch of their new strategy game, Rise of Rome [Free-Games], which is taking the world by storm! The dynamic game leads players through the creation of the Roman Empire and teaches them how to become true Roman heroes as the battle and conquer in the steps of history.

Rise of Rome has a feature that no other strategy games provide - the player can choose his own hero at the beginning of the game! You can recruit, train and use real heroes of the Roman Empire to battle against opponents straight from the annals of history. With over 90 Roman heroes to choose from, players can become Caesar, Hannibal, Spartacus and many other venerable historic figures as they level up their army through the game's history mode.

Additionally, players can use advanced tactics to change their attack strategy as they battle through various location based scenarios such as territory, region, port, city and faction. Using 72 different types of "Roman corps," the player can create an army that includes soldiers, elephants, stone throwers, an envoy army, long spear cavalry, spearmen and trebuchets. Rise of Rome is the only mobile strategy game of its kind that puts all players on an equal playing field by using several different in-game currencies. Players can use currency to purchase over 300 gear items to recruit and build their armies. Whether you want to buy gold via in-app purchase or earn coppers via experience, the player has equal access to items needed to make their army robust and strong! Plus there are 40 treasure boxes and 5 accelerating items players will find on their journey towards world domination.

Rise of Rome's gorgeous UI makes players feel like they are part of history. Whether they're clearing territory for farming, battling to take a rival city or building up Rome, itself - the beautiful artwork, day/night cycle and change of seasons make them feel like they are on the same streets as the great Caesar walked, himself!

- Choose your own hero from 90 historical Roman figures, including Julius Caesar, Pompey the Great, Hannibal, Octavian Caesar, Brutus and Sparticus!
- Unique battle system that allows players to change and use advanced tactics
- Play up to 50 vs. 50 in a dynamic war system that includes territory/region/port and faction wars!
- 72 historical Roman corps to choose from that include soldiers, elephants, stone throwers, an envoy army, long spear cavalry, spearmen and trebuchets
- Over 300 gear items! 40 treasure boxes! 5 accelerating items to help you on your journey towards world domination!
- Unique and vibrant game ecosystem that makes you feel like you're walking the same streets that Caesar did!
- In-app purchases for gold. Or, earn Coppers via experience!

Rise of Rome is available for iOS and Android and is the perfect mobile game for anyone who loves history, excitement and adventure!

About RNTS Media:
RNTS Media a digital content publisher. Our solutions and products offer advances in digital cross-platform media. From mobile games to mobile book apps, smart utility applications to online games, app store platforms to to innovative LTE technology, RNTS Media a hybrid of solutions that bridge the gap between ideas and develop in the ever evolving global market. Visit us on Facebook at https://www.facebook.com/RiseofRomeRNTS. 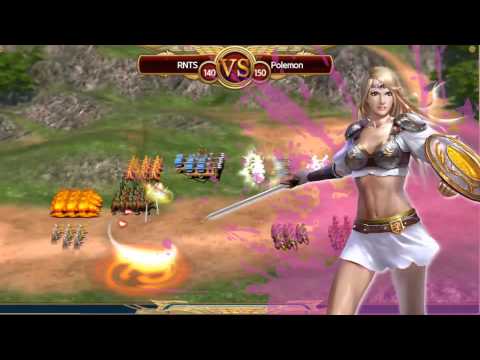