The revolt and ensuing riots were carried out by men the famed Buffalo Soldiers—after members of the Houston Police Department violently menaced them and citizens of the local black community.

"Mutiny of Rage chillingly recounts the resulting violence and bloodshed after Buffalo Soldiers revolted in Houston, Texas, but continues by asking whether justice for all sides was served. In a time when we seek social justice, and expect better from flawed judicial systems, Mutiny of Rage is just as poignant today as the events were a century ago." —Mike Ware, Attorney, Co-Founder and Executive Director, Innocence Project of Texas

"Salazar recreates an important yet overlooked moment in Texas and American history with a searing narrative about the Camp Logan race riots of 1917. Mutiny of Rage is at once gripping and vital in understanding the injustices that African Americans too often endure in the American criminal justice system." —Kenneth Williams, Professor of Law, South Texas College of Law at Houston

"Jaime Salazar's riveting and heart-pounding account about the 1917 mutiny that took place in Houston, Texas, gives voice to the voiceless, and pays long overdue tribute to the soldiers of color who were buried with no names on their tombstones. Salazar doesn't waste a word in the telling of this timely and relevant tale usually footnoted in the history books." —Ray Studevent, Author of Black Sheep

Salado Creek, Texas, 1918: Thirteen black soldiers stood at attention in front of gallows erected specifically for their hanging. They had been convicted of participating in one of America's most infamous black uprisings, the Camp Logan Mutiny, otherwise known as the 1917 Houston Riots. The revolt and ensuing riots were carried out by men of the 3rd Battalion of the all-black 24th U.S. Infantry Regiment—the famed Buffalo Soldiers—after members of the Houston Police Department violently menaced them and citizens of the local black community. It all took place over one single bloody night.

In the wake of the uprising, scores lay dead, including bystanders, police, and soldiers. This incident remains one of Texas' most complicated and misrepresented historical events. It shook race relations in Houston and created conditions that sparked a nationwide surge of racial activism. In the aftermath of the carnage, what was considered the "trial of the century" ensued. Even for its time, its profundity and racial significance rivals that of the O.J. Simpson trial eight decades later. The courts-martial resulted in the hanging of over a dozen black soldiers, eliciting memories of slave rebellions. But was justice served?

New evidence from declassified historical archives indicates that the courts-martial were rushed in an attempt to placate an angered white population as well as military brass. Mutiny of Rage sheds new light on a suppressed chapter in U.S. history. It also sets the legal record straight on what really happened, all while situating events in the larger context of race relations in America, from Nat Turner to George Floyd.

Jaime Salazar is a lawyer, engineer, soldier, and author living in Houston, Texas. He is the author of the 2005 memoir Legion of the Lost, which recounted his experiences joining and subsequently fleeing the French Foreign Legion, as well as co-author of Escaping the Amazon. He currently practices immigration, patent, and criminal law, and recently competed in the Houston Marathon. 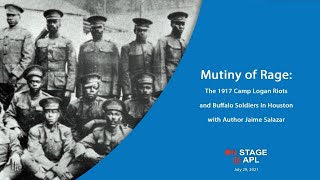